228 thousand acres of Thailand is currently submerged due to flooding. With the worst of flooding, so far, in Nakhon Sawan, Pichit, Sukotai, Phitsanulok and Ayutthaya, the national water command centre has issued warnings of more flooding in 13 provinces through this week as river levels continue to rise. Those provinces include neighbouring Rayong along with Chaopraya, Nakhon Nayok, Prachinburi, bng Pakong and Chantaburi, and anyone living down river from reservoirs, particularly in those areas is being advised to move to higher land. 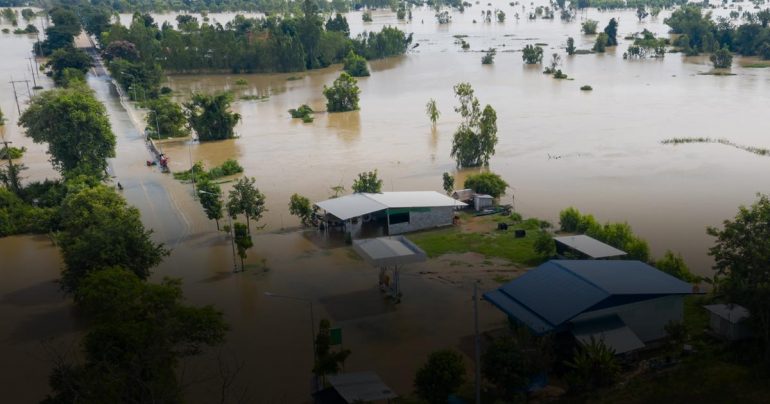 In Bangkok the Royal Thai Navy has offered its services to line up 80 boats against pillars, running engines and props to INCREASE the river flow and reduce flooding.

This as much of the capital region is seeing regular flooding, pumps in many cases have failed and a warning has been issued for the nation to do their best to remove breeding grounds for mosquitoes which carry the vile DENGUE fever disease and are keen to pass it on. 20K cases of dengue KNOWN to authorities with 17 deaths attributed since the year start. The chances are the figures are treble, that as many don’t seek medical help, knowing that it’s a matter of suffering and taking paracetamol to get through the days of pain. Garbage collection in Thailand is actually one of the best of services globally seeing bins emptied bi-daily in most cases. That helps, but removing pots of water or adding fish to them to eat the mozzie larvae is essential too.

The supreme court has upheld a 335 year sentence issued against an Indian financier who oversaw massive embezzlement  30 years ago that led to one Thai bank going under and the start of the financial crisis back then. Nabbed in Canada in 1996, he fought extradition until 2009 and is now in a Thai jail. He previously saw his appeal to the appeal court FAIL, and this week that judgement was upheld by the supreme court.  There is also the small matter of his 33.5 million baht fine. Reality is he will do a max of 20 years, due to the Thai penal code, but his options to appeal have finally run out. 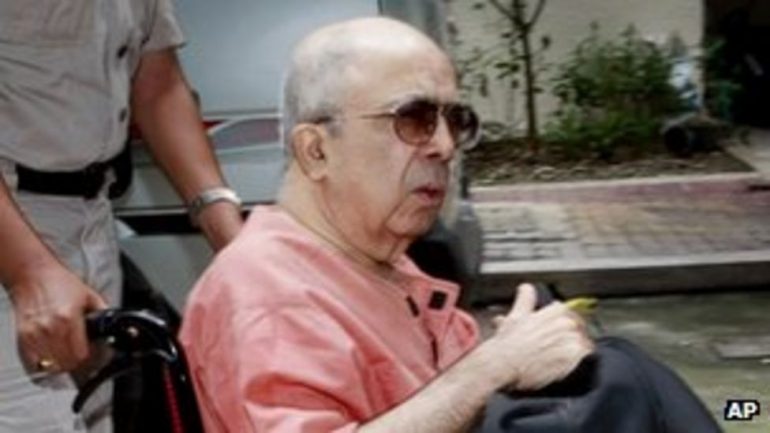 The Central Bank has revised its program designed to help Thais in debt, and offering debt restructuring for loans, mortgages and credit cards, to include all those in arrears prior to April 1.  The reorganising of loans can be extended to a maximum of 10 years and a rate of 5%.  With many deep in arrears due to covid the revamp has been welcomed.

In Prachinburi a national park ranger was killed this week as he attempted to chase away wild elephants from farmland. With two locals previously injured by the less than happy animals,  he along with locals had been driving them away.

In Songkhla when a Vietnamese fishing boat was seized by navy teams as it fished illegally in Thai water, the crew were removed to a navy vessel and service members placed on board, that is normal procedure, what wasn’t expected was a call to the main ship reporting that the fish boat had caught fire.  As the engine room smoked and burned, the sailors were safely removed, and then watched as the fish boat went down to Davy Jones’s locker.  The Vietnamese crew?  Well, they will likely be fined and deported, but without a boat, they are likely to find work onshore in the future 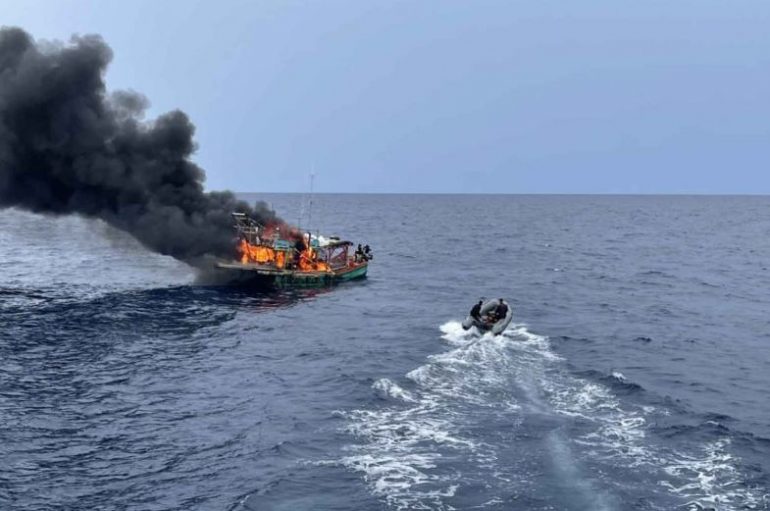 As Pattaya city government has still to make public the list of venues within the entertainment zones that do NOT meet fire safety requirements, more and more people are asking WHEN that will finally happen, AND what kind of public liability insurance these places carry. This as families of those who died or were injured in the Mountain B inferno that has seen close to 1 in every 4 of its patrons die as a result of poor fire safety combined with a lack of fire escape,  telling the media that funeral costs aside, the family of the dead have only received a meagre 50,000 baht from the bar owners.  A cashier who sadly died in the blaze left behind two small children, now without funds,  the family of a military officer’s son report that despite some 40+ days passing since the fire, they have not been contacted and the father of a student, still hospitalised has revived a pittance despite her needing to graft and in constant pain. For the future safety of clubbers and those who enjoy the entertainment areas, neither we, nor those families wil drop the constant reporting until genuine action is taken and reported and there is a reminder out there that clubbers should look around their chosen places of fun, wonder how they would get out in the event of a fire and, if accesses are limited or narrow, vote with their feet for safer venues. 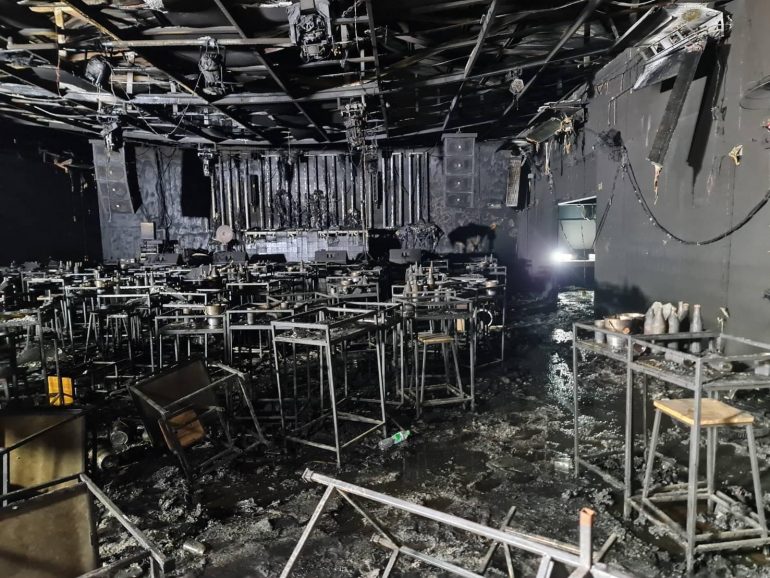 Locals in a series of Pattaya streets are asking the mayor WHEN something will be done to prevent runoffs from the major roads engulfing their homes during storms. With most losing all their possessions, again, reports of sewerage rising from toilets as floods put pressure on drains and tanks, combined with streets and lanes deep with sand after the water finally dried out. A visit by a deputy mayor to the pacific village community saw him order the city to at least clear the street of debris to allow passage. That, though, is only good until the next storms, and they, well they are on their way. 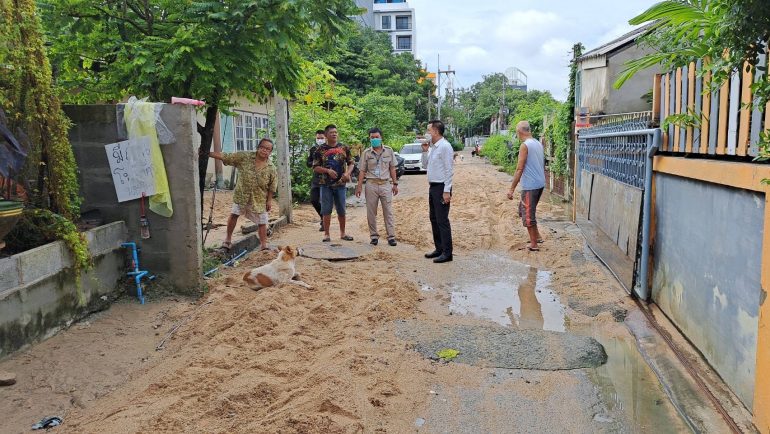 To the east side of the Sukhumvit, the so-called Dark Side, an expression dating back to a decade ago when many areas still had no street lights, have seen seen excess flooding despite new drains, and a complete mess in some areas where sluggish road repairs and pipe installation has seen mud washing into streets and homes. 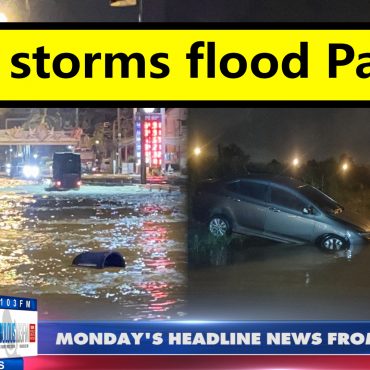 Thailand & Pattaya News, from Fabulous 103fm (12 September 2022) HM the King of Thailand expressed his sorrow at the passing of HM the Queen Elizabeth, who died in Scotland Thursday.  He went on to wish HM the King Charles III success in his coming reign and remembered with fondness the visits of HM the Queen and the Duke of Edinburgh to Thailand in years gone by.  This as acting […]